The best medicine I've found yet

Omg so cute! What breeds are they?! How have they been with your recovery?

I was just at the shelter dropping off donations today. Abby (pictured in the photo) is a “foster failure.” I was in between mvd’s and figured fostering a puppy would be a great idea. She was so sick when I got her nobody thought she would make it. I never new snot could come from a dog like it did from her. I had to fog up my bathroom and sit in there with here to try to help clear out her lungs. She was on lots of medication and it was very touch and go. After all that I figured I’d never be able to let someone else adopt her, so she’s been sleeping by my neck ever since. We think she is border collie, black lab, and dachshund.

My other dog, Radar, is a rescue also. He was the ugliest puppy in the shelter. My parents said he looked like the chupacabra. He’s boxer, Great Dane, greyhound and catahoula (we think). He gorgeous and the laziest dog ever.

Oh that is the truth. Get the mind off the pain is the best solution. That is why nights can be hardest for me. Hard to ignore it.

Bird watching helps too. I’m aware of the birds all day long and they give me micro seconds of relief but it all adds up in the course of the day. From the juncos to the pair of nesting eagles, lots to divert my attention. But it’s more than that, they make my heart sing.

I agree coldcompany, nights are the worst.

Here’s a pic of my other dog Radar

I love our little gals.

Riley (my favorite photo of her below) slept on Shindig's chest a long time yesterday. If he moved a little, she'd thump her tail and give him a little lick ... then quickly return to sleeping on him. It was so sweet! That’s awesome. I have a friend in Boston who has a rescue and is currently in production for a TV show with it! I try to do what I can with our local shelter that I got Abby from. I have networked with several of the main volunteers there. They’ve been really supportive and followed me through my surgeries. I love dog people

I came up with an idea for an event to get dogs adopted that we are going to do as soon as I am up to wrangling dogs outside all day long. We have a park here with miles of nature trails that people hike on. I want to set up at the trail head where people can take a dog on a hike with them and being them back. People like to hike with dogs. It’s right in my neighborhood too so it’s great exposure. Hopefully some people will fall in love with a dog and adopt! Even if they don’t at least the dogs get outabdget some exercise. It’s a win win. I can’t wait until I feel good enough to set all that up!

That’s awesome! My dogs have been like that through both of my mvd’s also. They just know. I’m being held down by Abby as I type!

That’s an awesome photo! I hope you have that framed in y’all’s house somewhere! There really isn’t anything quite like the love of a dog. I think rescue dogs know you’ve saved them somehow too. They are determined to return the favor!

I love our little gals.

Riley (my favorite photo of her below) slept on Shindig's chest a long time yesterday. If he moved a little, she'd thump her tail and give him a little lick ... then quickly return to sleeping on him. It was so sweet!

Love the dog pics! We have a puggle, Sam, that loves to cuddle and sleep. He is always on someones lap, usually my daughters. We also have a Shepard mix, Elsie, she was from a shelter. She’s the sweet and protective. They do make life better:)

Shindig- I saw you recently had surgery. Hope recovery continues to go well!! Hcal looks like you’ve had it too, more than once. Hope it gave you some relief! Thinking MVD might be in my future. Time will tell…

Your daughter is beautiful and it’s clear Sam loves her very much! Animals definitely make life better! I have had 2 mvd’s. the first one afforded me about 4 months of pain relief. The second one made it worse unfortunately. I’m having gamma knife on May 6th which will hopefully fix the problem. I would 100% do mvd again if I thought it would give me even another 4 months!

I love seeing all the pics of everyone else’s dogs! My two have been in bed with me all day today. They are the best.

Hcal sorry to hear you’ve been in bed all day, glad you had cuddle partners:) Some days I can out sleep Sam and he sleeps 22 out of 24 hrs.You have been through too much. It just plain sucks that the second mvd made it worse. I can’t imagine…I’ll be praying May 6th is the start of a new painfree chapter in your life!

All the rescue dogs I know are the most grateful dogs in the world.

I had a faithful German Shepherd for over a decade. I really miss him but now is not the time.

So admiring of all the people who do this great work!

We just lost our yellow lab Maggie who was 16 years old. It was just a few months ago and it was especially hard on my mom. Maggie followed her EVERYWHERE. I lost mt do dog Roneo in October 2011 right around the time that my TN really kicked into high gear. It’s been a rough couple of years. We lost my grandmother in Dec 2011, then one of my great aunts around this time last year, and the lady of my great aunts yesterday. There’s been a lot of loss along with my tn. Wow, I just went all Debbie Downer on a happy thread!

I currently have a dog on each leg and a heating pad in my pillow. I literally have the warm and fuzzies. 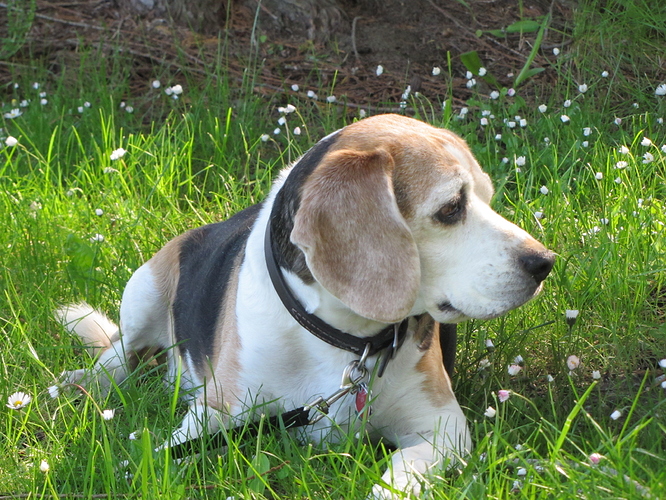 I am new to group as of yesterday.

I am just learing my way around the site, and it was fun to see the pet lovers and photos

They really do give unconditional love, and my boy sure helps me get throught the rough times.

This is Benton, our beagle. He is getting a bit gray, we have had him 13 years.

Loved seeing all your dogs photos and stories ;)

Your beagle is so handsome! Sometimes we need to focus on the sources of love in our life instead of the sources of pain I think. I am glad to welcome you to the group, although I’m terribly sorry that you have TN and need us at all! I haven’t been here all that long myself, but I have found the support group so very helpful. My family is thankful that I have an outlet and have a lot more patience with them now lol. I hope you find us helpful and feel open to sharing your journey with us as well