Opinions on my story

General General TN & GPN (Old Site)
jim4 June 27, 2015, 1:31pm #1
I had root canal on an upper canine tooth 4 months ago. They used 3 injections including articaine and the numbing did not wear off completely. I was left with burning/tingling all over the left side of my face. After some research it became apparent that i had suffered nerve damage which normally heals after 6 months. In fact I thought it had gone after 3 months but that is where it becomes tricky.
I then started getting burning pain in my palate on the same side as the root canal. this also went away after a week. THEN i started getting burning pain above the root of the root canalled tooth. It is a numbing burning pain. And then the facial burning started up again.
in many ways this is an unconventional case. For example, i never hear about nerve damage from upper jaw injections. How could it have even happened?
secondly, what exactly am i suffering from? is it simple nerve damage from the anesthetic which normally wears off after a few months? if so, why has it come back? and what about the burning in the tooth and in the palate? could the root canal have failed? i would expect pain rather than burning if it had failed? or could it be that the infection has come back causing the infection to affect the nerves? is that even possible?
could the gutta percha have come out after 3 months? how would that affect the nerves when the nerve has already been removed?
thanks
Toothache June 27, 2015, 3:16pm #2

Have you been seen by a dentist again and had your xrays redone? Ask for a referral to an oral medicine specialist. They have experience in this sort of thing. 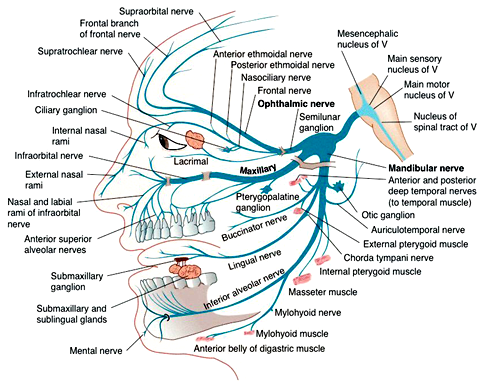 did u have toothache type pain in that tooth before you had the root canal? Why was the procedure done in the first place?

Even if they effectively root canaled the tooth it is the nerves that connect to the tooth and travel further along that cause issues with nerve damage...and if it is neuralgia then the nerve is misfiring signals to the brain that cause pain in other locations along the nerve.

the root canal was absolutely necessary because the tooth was dead and infected. the xray showed a dark area at the root tip.

IF it is neuralgia. thats the big IF. Is it neuralgia or is it a continuation of the nerve damage that initially occurred from the anesthetic?

Based on the signs I think i suffered nerve damage which went away after 3 months. this seems likely since the literature says thats what happens in most cases. And maybe now i have neuralgia. Or not.Maybe its a reinfection causing nerve tingling? maybe its a continuation of the initial damage?

I dont know which it is?

Jim, thanks for sharing your story. If you have not seen a neurologist yet, I think it would be a good idea. I have some similarities with your story. My odyssey started 11 years ago with what I thought was just dental issues. I was having one second bolts of an extreme pain in the roots of upper jaw teeth. As they got more frequent and a little more intense, I went to dentist, who could not really find anything besides a very very minor crack in one of the teeth. Since the pains continued, he eventually decided to fix it, But could not seem to numb the area with Xylocain enough for the stabbing pain to go away. So he gave me quite a few injections, so he could eventually fix the area. When the numbness wore off, almost a day later, I started having 45 minute episodes of extreme electric lightning bolt pains in my cheek. Dentist never mentioned possibility of trigeminal neuralgia, I don’t think he had ever heard of it at this point, and sent me to an endondist. He could not find any problems, but because I was extremely desperate in pain and triggerpoints were centered in the roots of my upper teeth, in the course of a couple weeks he did three needless route canals. After the third one, I went back to him again still in extreme pain, still feeling it was in the root of my teeth. At this point he finally mentioned"I think we might be dealing with some sort of neuralgia"and sent me to a neurologist. Within about two minutes of talking to the neurologist he said it was likely TN and started me on Tegretol. It worked for me right away, which he said confirmed the diagnosis. I had never heard of TN before that. Luckily after a couple of months I was able to wean off the Tegretol and the pains stayed away for 10 years. Unfortunately it is now back, and I have had to increase the Tegretol to a very high dose to keep the very bad longer episodes away. However I am having the continual one second stabbing pains all day long, approximately one or two a minute. I think MVD is the way I am headed, cannot imagine staying on Tegretol my entire life, and also am envisioning my myelin getting more and more damaged.
I still go to the same dentist, he now knows what TN is! He now only uses Carbocaine on me instead of Xylocaine, thinking that I may have had some reaction to that. Has only needed to do that I think once, but it did cause head numbing that I was used to with dental procedures in the past. So who knows if all the injections he gave me triggered this bad T.N. or not?
Again thanks for sharing your story, I have not had any of the numbness or burning type of pains that you mentioned. Wondering if any of the dental people you are seeing have mentioned possibility of TN? From reading lots of posts on thus site and from my own experience, I think dentists, endontists and oral surgeons need more education about this. Oh yeah, somewhere along the line I went to an oral surgeon, who happily wanted to pull a tooth or two, which luckily I refused. My story of root canals, is not uncommon, and I know many have had teeth pulled trying to fix this problem. From my experience, again I would urge you to talk to a neurologist if you have not already, and be weary of anything the teeth guys want to do. Good luck and I hope things get better for you!

Reread my reply, I wanted to say the Carbocaine did NOT cause the head numbness that I was used to in the past with dental procedures.

I really think this is a poor place to try to get a diagnosis. You should consult with a dentist to rule out a dental cause. Like I posted earlier, oral medicine specialists are good people to see about this. Get several opinions to make sure you're not getting unnecessary dental work. Neuropathy is a relatively rare complication of any dental procedure. Dentists with decades of experience may not even see one case. It is more likely, statistically, that your pain is from a dental cause than TN.

People on here will say differently because many (including myself) have gone through needless dental procedures to try to alleviate the pain. There is a saying that "When you hear hoofbeats, think of horses not zebras." You need to have a professional examine you and rule out an organic cause to your pain first. I hope, for your sake, that your pain is from a dental cause rather than a neuropathic one.

yeh but i have suffered nerve damage. There is no question about that. After i had the injection, i suffered prolonged tingling and burning exactly where it went numb on my face which after 4 months hasnt gone away. Burning pain is usually a nerve problem. So either a reinfection is causing the nerves to do this. Is it possible? can somebody explain how? Or its atypical otondalgia

If you think you suffered nerve damage from the injection then that is not neuralgia at all. If this pain only started directly after the injection then that is what it sounds like happened. Nerve damage with dental procedures is not rare. There are lots of people here that have it. And yes, sometimes it can heal over time (I don't know the numbers on that) but sometimes it doesn't. I am not a specialist. I am just speaking from what I have learnt on my own.

I was told that nerve damage can only affect that branch of the nerve. Again--this is only info from people's experiences. Anways, so maybe that could account for the multiple locations of pain.

There is belief by some that neuralgia can be triggered by dental work...that it is waiting there already. And lots of us have had dental procedures that didn't need to be done. I'm pretty sure there are dental specialists that deal with nerve damage. I think you absolutely do need to keep investigating this issue. Seek out specialists and learn as much as you can.

The burning, stinging, deep, constant pain is what I have--that is considered to be atypical pain. And it can move around and affect different areas. It has all kinds of sensations.

Hopefully some other members with similar experiences join the conversation.