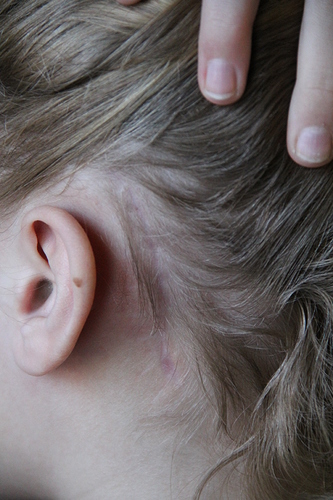 I am so glad to be able to write this post. Things have changed greatly in our lives in the past 3 months. So much so, I've forgotten to come back and update you all, and I humbly apologize for that.

You see, KTRose's MVD surgery was 3 months ago today, on December 4, 2012 at Hopkins with Dr. Ben Carson. (Yes, *that* Dr. Ben Carson who has been on the news for the past several weeks. We loved him before all that happened!)

When she went into surgery, her two MRIs showed no compressions, and we had been turned down for surgery by two other top Pediatric Neurosurgeons in Washington, DC and the Bronx, NY. If they couldn't see a physical cause, they weren't going to go messing around in her head. While we understood, we were heartbroken.

We were effectively told that her medication was doing a good job of controlling her pain - for which we were thankful - so just stick with that. We were even strongly encouraged to up her dose, even though she barely felt twinges she was having. Apparently her academics were of little concern because I had repeated said that the brain fog was really difficult, especially for a kid who had worked extremely hard to compensate for a learning disability already.

However, while we were discussing seeking out other docs, we got a call from Dr. Ben Carson's office saying he was back from his speaking travels, had looked at her scans and *would* do MVD, but this was entirely up to us. He did not see a compression of the TN either, but he saw a vein against the nerve that, given her very typical Type 1 TN symptoms, was sure really was creating a problem. It took us 3 days of back and forth with questions before saying, Yes. We want to do the surgery. And it's worth noting that KTRose was repeatedly asking if we had decided to do the surgery because she wanted it so badly at this point. She was frustrated with meds and afraid of the pain growing.

I got a call from our neurologist who tried hard to talk us out of surgery. But ultimately our thinking was... this is the only shot we have, that we can see, of a permanent fix. It might not be, but it could be. And it's the only thing that gives us that shot. This is our 12 year old daughter! She has her whole life ahead of her, and what we are looking at without surgery is repeated stopgap procedures, medications in increasing doses that fog her thinking and limit her ability to live her life, possible remissions which always come to an end... repeat.

So on December 4th we find ourselves holding her hand, praying with her, and handing her over to Dr. Carson and his team.

4.5 hours later Dr. Carson walks out of surgery. He tells us he found the vein wrapped around and attached all along the T nerve, which he detached and moved. The T nerve had also grafted itself to the Tarentium (sp?) membrane "like superglue" and had to be gently scraped away bit by bit, and after that a little cluster of vessels were found attached under the T never. He worked on all of this to isolate the T nerve and protected it with the teflon padding. Again... none of this showed on the two thin slice MRIs we had done.

KTRose came through like a champ. She spent a bit over 24 hours in PICU, and was moved to a regular room where she walked a lap around the floor 36 hours after the start of her surgery. She was sitting in the play room giving Wii advice to another patient later that same night. We were release to and went home December 7th, though we were approved to and welcome to stay until December 9th. She was just doing so well, we were ready to go.

My profile pic right now is a picture that was taken 11 days after her surgery by a photographer friend of ours. At that point she was completely up and around and eating mostly normally again (appetite was slow in coming back), just not overly active and still took naps daily.

As of today, she is doing absolutely wonderfully. She is happy, she has been off all meds for about just under 2 months, and she is back to a full school schedule. Now when people come up and ask how she is doing, I have to remind her they are asking about TN and the surgery, and then she is happy to recount the whole thing.

She does have a little residual pain, but it is extremely mild. As in she will say, "Oh I'm feeling it." And 2-3 minutes later I will ask if she is still feeling it, and she will shrug and say no. This pain is only over her left eye (not all three branches like she had before), is gone quickly, and not painful enough for her to stop her activity. And it only happens maybe once every 2-ish weeks or so.

I know there are no guarantees of no pain in her future, but she has a really good shot now. I am so excited about this.

KTRose has also said that she knows this wouldn't happen to her for no reason, so maybe part of the reason is to tell other people about TN so there will be more done to help the patients, and to talk to patients about TN and MVD so they aren't so afraid of it. :-) Maybe so, sweetie.

Thanks all for all of your prayers and support. I intend to stay active on this board even if she never has pain again. I want to talk to anyone that we may be able to help with our story, and encourage all TN sufferers to be their own advocates and never give up until they find the right people to help their pain.

Prayers and love to you all,

OH THIS IS SO WONDERFUL!!!!!!!!!!! I am so very happy for you all. This makes my heart so happy today. I just could NOT imagine being a child and going through this TN mess. It is horrifying for an adult, but a CHILD? This is just the best news! PLEASE keep us posted on her progress! Much love and continued prayers, Donna

Oh Meg! What a blessing! I’ve often thought about KTRose, I’m so glad you posted this update, full of good news no less.
I’m getting my date for MVD within the week and your post was timely, reassured me I’ve got nothing to lose, if KTRose can do this, so can I! So please tell her…her courage and strength helped me today!
Continued well being and huge (((( hugs )))) to you both!
Mimi xx

Mom what an ispiration your daughter is, sad that she was afflicted at such a young age all I can say is “Courageous” she is in my thoughts and prayers that she will remain pain free and have a happy, smiling ,and wonderful life. Kuddos for her and you too Mom!

What a beautiful story and an inspiration your daughter is! I just recently had my MVD and know how painful the recovery from this is. I look at my children and can’t imagine them going through what I’ve been through…it must have broken your heart to watch her in pain. I too would choose the operation for my children if it means giving them a chance at pain free life! I wish you all the best xx

Thank you so much for posting about your daughter! This is definitely reinforcing my decision to have MVD myself knowing someone younger than even me has had a successful surgery. You have no idea how much happiness this has given me, your daughter is very special. I’ll be thinking about her for years to come, and I hope the pain never comes back to her again. I’m so glad she is living happily. Tell her she has made one more person a lot more hopeful on fixing their TN.

Thank you for taking the time to share this story.